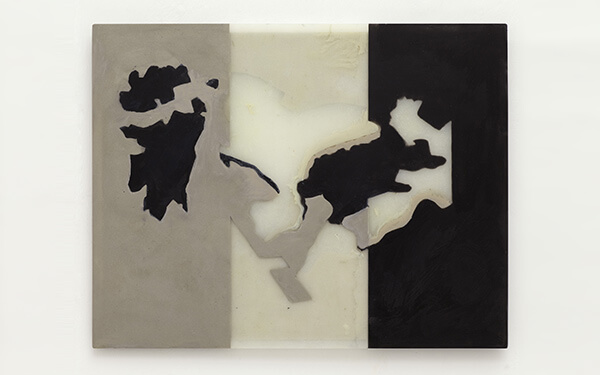 In 2007, we made a decision to work collaboratively and to exhibit as a permanent joint identity. This followed independent careers as artists since the mid 1970s. The benefits of working in partnership over a longer period of time are that the separate inputs interact beyond the preconceptions of either individual.

The primary medium we use is pigmented epoxy resin and a material called Diab, which provides a support. This is applied as separate layers, so is conducive to two or more people making contributions. A characteristic of this medium is that the work is made in reverse so that the first marks made are preserved on the surface of the painting and that all subsequent alterations are behind and only visible through the first [transparent] layer, or between the remaining clear spaces. On the one hand, this process has to be the result of careful planning; on the other hand, as no action can be erased, the final outcome is out of our control. We are fascinated by this mix. Some of these paintings are made as pairs, which differ only in the final adjustments made by one or the other of us.

Most of our paintings begin with a response to a place. We enjoy the mixture of anonymity and familiarity of public spaces used by ourselves as part of our lives. The paintings in this exhibition all relate to a suburb of Kyoto called Shugakuin. We were staying in an apartment on the tenth floor of a high rise block. One hundred and fifty feet below was the street. The traffic and city activity was masked by a canopy of roadside trees, but directly below the apartment a small section of street was exposed. The street's dynamic geometry was dramatically contrasted to the expanse of trees and isolated high rise blocks. The view resonated with our idea of Japanese culture and art. The sections of trees that were lit up incidentally from streetlights below made a series of floating patches and the image was divided by the window bars, reminiscent of the panels of a Japanese screen.